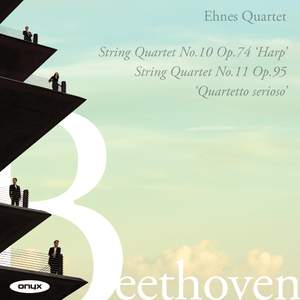 This, the third in the series of Beethoven’s late quartets from the Ehnes Quartet deviates from the official ‘late’ works to include the last two of Beethoven’s ‘middle period’ quartets: The sunny and amiable E flat, known as the ‘Harp’, and the terse and irascible F Minor, known not surprisingly, as ‘Serioso’.

Beethoven had a habit of working on two works of wildly differing emotional ranges at the same time - never more clearly illustrated as in these two masterly quartets.