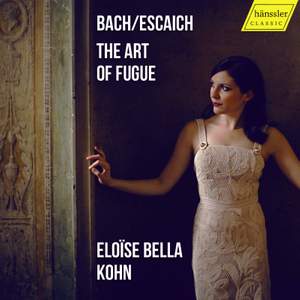 Canon per Augmentationem in contrario motu

"The Fugue is the most complex of all musical forms, a genuine demonstration of prowess in composition. Johann Sebastian Bach's The Art of Fugue demonstrates him striving to defend this outdated form. The overall concept of the collection is unique: from a single D minor theme, Bach develops twenty fugues and canons. Composed towards the end of his life, when Bach was between so and 60 years old, this cycle of fugues can be regarded as his artistic legacy. The last fugue (Contrapunctus 14) is particularly celebrated because Bach used the Note-Letter symbolism to write his name B-A-C-H as the letters matching the notes of the third theme, as an architect would do by engraving his name on the stone of his building. Bach was not able to finish this com pl ex fugue any more. Kohn: 'This recording offered me an opportunity to commission from Thierry Escaich, my former teacher, a new completion of this last unfinished fugue. There is a remarkable similarity between the respective musical activities of Thierry Escaich and Bach. Escai ch is not only renowned as a virtuoso organist and improviser but also as one of the most sought-after composers internationally. Furthermore, he teaches composition at the Conservatoire de Paris with a focus on fugues."