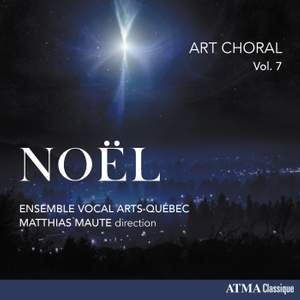 trad.: It came upon the midnight clear

trad.: The Twelve Days Of Christmas

ATMA Classique is proud to collaborate with Ensemble vocal Arts-Quebec and Mecenat Musica on ART CHORAL, a unique and ambitious project surveying the history of choral singing over six centuries, from the Renaissance to the present day. Consisting of 11 volumes, the series will roll out over the next three years and will feature works by 50 composers from the 16th to the 21st centuries, as well as 11 webcast concerts and 120 videos.

Ensemble vocal Arts-Quebec is a professional choir whose mission is to present the great tradition of choral singing in Quebec, Canada, and abroad. Following almost 40 years of leadership by founder Yves Courville, in 2018 the choir appointed two-time JUNO Award winner Matthias Maute as its artistic director.

The Ensemble received the Opus Award for Musical Event of the Year in 2020. Matthias Maute has achieved international renown as a conductor, recorder and flute player, and composer. Mr. Maute is esteemed for his artistic direction of Ensemble Caprice, for whom he produces ingenious, fascinating programs.

As a conductor, Maute has increasingly focussed on large scale projects. His versions of Bach's B Minor Mass, J. D. Zelenka's Miserere, and the Magnificats by Arvo Prt and J.S.Bach were broadcast nationwide by CBC Music and Radio Canada/ICI Musique.