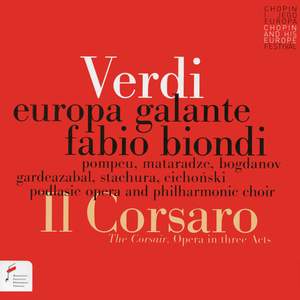 Though he’s not particularly subtle, Matheus Pompeu brings a striking tenor, vivid colours and a sense of style to Corrado the corsair...The most impressive performance overall comes from Aleksey... — Opera, December 2021 More…

Verdi: Per me infelice, vedi costei

The Corsair is an Opera in three Acts and is performed here in concert for the first time on historical instruments. The Corsair, to a poem by Byron, appeared among Verdi's operatic projects very early, like many other works by the same author, including The Bride of Abydos and The Two Foscari (1821).

The composer considered all three texts when preparing for the 1844 carnival season in Venice. In 1845 Verdi made a commitment to Her Majesty's Theatre in London, signing an agreement for an opera that was to be premiered in the summer of 1846.

After a lot of arguments, stubbornness and friction between Verdi and the librettist Francesco Maria Piave, the opera came into being suddenly and unexpectedly. Pressed by his publisher, Verdi composed Il Corsaro in an access of rage.

The ill fated work was finally staged in October at the Teatro Grande in Trieste. A complete flop, it disappeared ignominiously from the bill after just three performances. And although a revised version fared much better a few years later in Cagliari, Modena and Milan, it never lost its label as a poor work.

One of the striking features of Verdi's score is its economyboth thematic and formal. And although that does not allow us to raise Il corsaro above the group of minor works in Verdi's output, it does lend it a unique character and value.

In no other opera does Verdi draw so much out of so little material, the relative modesty of which is combined here with subtle craftsmanship. So contrary to our worst fears, the exceptional character of Il corsaro is what saves it. Of course, it has an essentially conventional form, with routine cabalettas, unremarkable choruses and pale reflections of that which the composer achieved earlier. It is also very short, like Alzira. Yet there remain its unquestionable assets, moments of lyricism and poetry.

Performed by the incredible forces of Fabio Biondi and his Europa Galante, the solo parts are filled by exceptionally skilled performers accompanied by the Podlasie Opera and Philharmonic Choir.

Though he’s not particularly subtle, Matheus Pompeu brings a striking tenor, vivid colours and a sense of style to Corrado the corsair...The most impressive performance overall comes from Aleksey Bogdanov as Corrado’s mortal enemy Seid, an interpretation full of character.