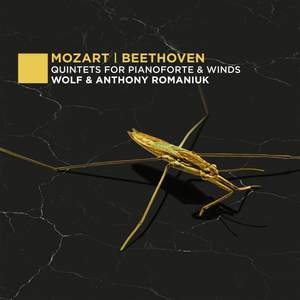 Quintets for pianoforte & winds by Mozart and Beethoven performed on period instruments by ensemble WOLF and Anthony Romaniuk.

"I myself consider it to be the best thing I've written so far" - this is Wolfgang Amadeus Mozart's own description of his Quintet for Piano and Wind Instruments, K 452. The quintet made such an impression on his contemporaries that the young Ludwig van Beethoven also used it as a template for his own Op. 16. The unusual combination of instruments employed in these pieces, unique in Mozart's case, encouraged them to experiment with genres, blurring the boundaries between chamber music, symphonic writing, concerto, and operatic aria. WOLF's approach to this repertoire is guided by its use of historical instruments; they are joined for these works by fortepianist Anthony Romaniuk.

WOLF is a Belgian wind collective, specialised in classical music, performed on period instruments. The members of WOLF have all won their spurs with the most prominent ensembles at home and abroad. The specificity and playing style of old instruments are the guiding principle in their approach to 18th- and 19th-century chamber music.

In 2012-2013, they have performed a first series of successful concerts around serenades for wind instruments by Mozart and Beethoven. WOLF then joined forces with a group of like-minded string players, followed in 2014-2015 by a concert series around Mozart's famous clarinet quintet. In 2016, Australian pianist Anthony Romaniuk joins WOLF.