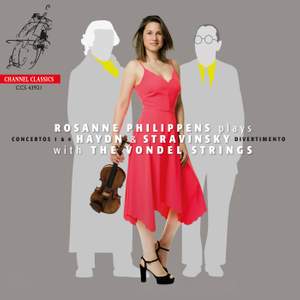 the rising young Dutch violinist/ director Rosanne Philppens draws an exquisitely chill sweetness of expression from her 1727 ‘Barrere’ Strad [in the Stravinsky]. The Haydn performances are equally... — BBC Music Magazine, Christmas 2021, 4 out of 5 stars More…

Preparations for the present album have offered us much lightness in the dark months of the corona crisis. The timing was right: I dreamt at length about forming an ensemble of Dutch top musicians to record the Haydn violin concertos and the arrangement of the Stravinsky Divertimento in a play&direct setting. Empty corona diaries suddenly presented a short-term opportunity.

I have often performed Haydn and Stravinsky in combination, and although at first sight you might not associate one with the other, I do believe they form a fine pair. Why oh why? Perhaps because of the music’s frankness. The nimbleness. The intelligence behind it. And the humour, which you hear so well in the little final movements in particular. Haydn plays with his time signatures and puts the listener on the wrong track with his halting phrases. The pleasure of Stravinsky emerges for instance in a romantic pas de deux which turns and changes into a sort of circus music. I think both pieces are cheerful, light and sometimes rather romantic, but never over the top. - Rosanne Philippens

the rising young Dutch violinist/ director Rosanne Philppens draws an exquisitely chill sweetness of expression from her 1727 ‘Barrere’ Strad [in the Stravinsky]. The Haydn performances are equally stylish, but additionally imbued with a warm affection for the music that is rather special.

the performance [of the Stravinsky] is excellent, doubly impressive given that Philippens is directing her ensemble while playing almost continuously herself. Rhythms are crisp and exactingly precise…The Haydn concertos are nicely done, too.