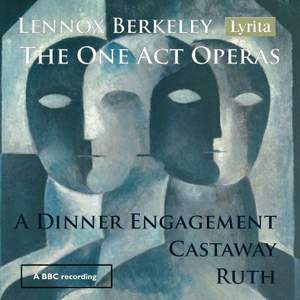 Mother, Please Can I Help?

We Saw Him Last

So This, Dear Lady Dunmox, Is Your Drawing Room

Sir, Will You Join Us?

But If You Are the Dunmow's Daughter?

And Now, Shall We Go Into the Garden?

Kiss Her at Once!

Once More I See Your Green and Golden Hills

See! Is This Naomi!

Who Is This Approaching?

Let Me Beg You to Forgive Your Countrymen

This Is the Place! Come, Daughter

Ho There, My People!

Before the Morning of My Life (Live)

Sir, Do Not Misunderstand Me (Live)

We Observe That Our Shipwrecked Stranger (Live)

I Will Sing You a Song of the Shore (Live)

What Shall I Sing to My Lord the Stranger (Live)

Berkeley’s first opera, Nelson, was put on at Sadler’s Wells in 1954. The others were performed by the English Opera Group which had been founded by the young Benjamin Britten, Joan Cross, Eric Crozier and Peter Pears in 1946. In the same year as the Nelson premiere Berkeley’s first one-acter, A Dinner Engagement, featured at Aldeburgh. Aldeburgh was also the scene of Ruth in 1956 and Castaway in 1967. Each work inhabits its own world, and each finds Berkeley’s musical imagination delivering new sounds to match the drama.