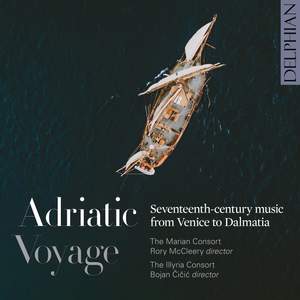 Throughout, singers and instrumentalists breathe and communicate as one, their rapport unbreakable. A recording, in short, packed with fresh discoveries at every turn; and a vivid snapshot of... — BBC Music Magazine, February 2022, 5 out of 5 stars More…

Sorte, B: I superbi colossi

The Croatian violinist talks to Katherine about his Presto Award-winning recording of 'Seventeenth-Century Music from Venice to Dalmatia', released on Delphian last summer and featuring music by composers including Francesco and Gabriele Usper, Ivan Lukačić and Tomaso Cecchino.

In March 1575, a party led by the Venetian diplomat Giacomo Soranzo set out on a mission to Constantinople. They sailed down the Istrian coast, along the length of present-day Croatia, and on to the Bay of Kotor. Much of the land they passed was the territory of the Serenissima – inhabited by both Italians and Slavs, and of strategic importance since it was exposed to constant Turkish threats from the Balkan hinterland.

Two of Delphian’s most admired ensembles join forces for this imaginative programme of sacred and secular music by composers working along the Dalmatian coast in the decades after Soranzo’s expedition. It was a time in which constant movement of people and trade of goods created linguistic and cultural cross-currents, in contrast to the sharp distinctions encouraged in later centuries by the emergence of modern nation states.

Much of this music would have been regarded as Venetian, but the journey points up intriguing differenc- es between the composers and pieces presented, many of them in premiere recordings, while violinist and director Bojan Čičić’s interactions with cornettist Gawain Glenton – and the rich ornamentation contributed by all the musicians here – bring the period back to vivid, unforgettable life.

Throughout, singers and instrumentalists breathe and communicate as one, their rapport unbreakable. A recording, in short, packed with fresh discoveries at every turn; and a vivid snapshot of ‘La Serenissima’s ear-expanding outreach throughout its wider domains.

a cornucopia of sacred and secular instrumental and vocal music, performed with arresting, period-evocative beauty, which highlights not just what a fascinating period this was for Italian-Slav cross-cultural blending but also how little most of us know about it.

There are many things to love about this collaboration between the Marians and Čičić's Illyria Consort, not least the way that ornate contributions from the solo violin and cornet weave organically into the already rich tapestry created by the singers (who impress jointly and severally throughout); the repertoire, too, is enormously attractive.