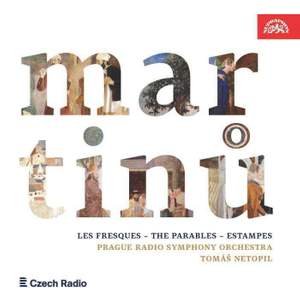 Martinů’s orchestral soundworld is distinctly his own, without ever being samey. The vividly painted Les Fresques de Piero della Francesca is the best known work here, though The Parables, mysterious... — BBC Music Magazine, Christmas 2021, 5 out of 5 stars More…

Recorded at Studio 1 of Czech Radio, Prague, 11–12 January, 30 April – 2 May 2021. “And the sculptor fixes the likeness of a face in clay. And you walked by and passed before his work, and you glanced at the face and then walked on your way. And then it happened that you were not quite the same. Slightly changed, but changed.” The motto Bohuslav Martinů chose from Antoine de Saint-Exupéry’s Citadelle for one of his Parables also poetically defines the transformational power of his final orchestral opuses. Following the six symphonies composed in the USA, he wrote them in Europe, much closer to his homeland. The orchestral triptych Les Fresques de Piero della Francesca was inspired by the work of the Italian Renaissance master. As Martinů himself put it: “The frescoes harbour a peculiar kind of solemn and rigid tranquillity, abounding in strange, serene and moving poetry; it is the darkened coloured atmosphere I strove to express in music.” The Parables is another piece in which Martinů reflected his philosophical ideas, with each of its three movements treating an allegory of life and human quest in the world. The symphonic prelude The Rock refers to the landing place of the English settlers who came to North America in 1619, as well as Martinů’s own fate as a homeless pilgrim. Martinů’s very last symphonic work, Estampes, comes across more as a fine drawing interwoven with silence than an impasto, as is the case of his previous orchestral pieces. These brilliant, extraordinary Martinů works are yet to gain the recognition they so richly deserve.

Martinů’s orchestral soundworld is distinctly his own, without ever being samey. The vividly painted Les Fresques de Piero della Francesca is the best known work here, though The Parables, mysterious and dramatic in turns, is also well worth getting to know via these excellent performances.

I find all of these performance to be idiomatic and wonderfully recorded in Studio 1 of the Czech Radio in Prague. For those who enjoy the music of Bohuslav Martinů, this is another successful release under the compelling baton of Tomáš Netopil.