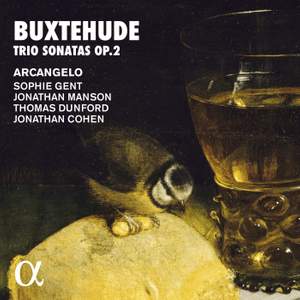 They demonstrate their lively sense of the fantastic style, with intuitive responses to rapid rhythmic subtleties and the myriad compositional dexterities of these rewarding sonatas…these musicians... — BBC Music Magazine, November 2021, 4 out of 5 stars More…

The sonata concertata form is perfectly illustrated in these trios by Dietrich Buxtehude which, according to Peter Wollny constitute ‘a landmark in the history of the sonata’. They provide a better understanding of a composer who has owed his fame chiefly associated to his cantatas and organ works, and to the admiration of the young Johann Sebastian Bach, who walked 400 kilometres to hear him play. After recording Buxtehude’s first set of chamber sonatas (ALPHA367), the musicians of Arcangelo (Sophie Gent, Jonathan Manson, Thomas Dunford and Jonathan Cohen) now revive the pieces from the second collection, published in 1696. It shows the multiple European influences (Baltic, Italian, German, French) that flourished in Lübeck, the north German city where Buxtehude worked as organist of the Marienkirche, but also in Hamburg, where the music was type set.

They demonstrate their lively sense of the fantastic style, with intuitive responses to rapid rhythmic subtleties and the myriad compositional dexterities of these rewarding sonatas…these musicians seemingly revel in the sheer freshness of Buxtehude’s craft. Sophie Gent and Jonathan Manson engage in eloquent, communicatively punctuated dialogue.

Sonata No 5, with its strong contrasts and substantial solos, is a tour de force, but elsewhere I liked the way Arcangelo seem simply to enjoy the sound world they are creating, almost in reverie, instead of always having to push at the tempo.