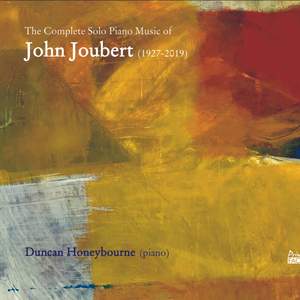 Joubert: Evocations: A Rhapsody for Piano

Joubert: Lyric Fantasy for piano, Op. 144 on themes from the opera Jane Eyre

Duncan Honeybourne's recording of Joubert's piano music was first released by Prima Facie in February 2019, a few weeks after the composer's death. Honeybourne, a close friend of Joubert and the dedicatee of the Third Piano Sonata, had studied the works with the composer, who asked him to record his piano music and described his pre-release copy of the disc as "one of my most prized possessions." The recital charted a chronological journey through Joubert's complete published solo piano music, from the bracing Dance Suite, written in John's twenties, to the transcendental musings of the Third Piano Sonata, composed when he was almost eighty.

This second edition also offers something extra: a remarkable work from Joubert's years as a student at the Royal Academy of Music. In December 2020 Joubert's daughter Anna discovered the manuscript of Evocations, a rhapsody for piano, which John had written at the age of 22. Howard Ferguson, one of John's composition professors, gave the work its first performance at the RAM in 1950, but this student work was quickly shelved as Joubert achieved international renown for his ever-growing output of masterpieces.

Honeybourne writes: "The strong personality I knew so well from Joubert's later work jumped vividly and unmistakably off the page. I was astonished at the maturity and assurance of the writing, the fluency of the invention and the technical ingenuity with which the one-movement structure was knitted together. I felt that we should add Evocations to my existing recording of Joubert's piano music, to offer a truly complete conspectus of this very distinctive composer's writing for solo piano. This new set of two discs is the result."

The first edition of The Complete Solo Piano Music of John Joubert was awarded 5 stars in Musical Opinion and featured as a Recommended Recording on Austrian Radio (ORF) in 2020. "glittering performances from Duncan Honeybourne...it is not hard to hear why Joubert was drawn to his playing." International Piano, 2019