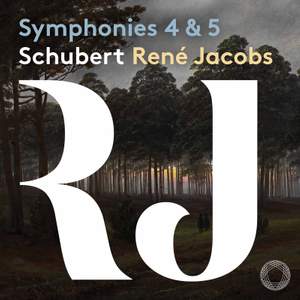 The period instruments bring a litheness and transparency, with vigour in the third movement allegro molto [in No. 5], the more pastorally phrased interlude liltingly done by the B’Rock, before... — BBC Music Magazine, November 2021, 4 out of 5 stars More…

Multiple prize-winning conductor René Jacobs and the B’Rock Orchestra present the third instalment of their Schubert cycle on PENTATONE with a recording of the composer’s Fourth and Fifth Symphony. Just as with the Second and Third, Jacobs approaches these works as a symphonic pair, revealing contrasting aspects of Schubert’s personality and compositional approach. The Fourth is Schubert’s first symphony in a minor key, and adumbrates a totally new harmonic worldview that Dvořák associated with Wagner’s Tristan und Isolde. On the contrary, the Fifth sounds Mozartian and cheerful, although that light-heartedness is only an appearance, as is so often the case in Schubert’s music. In the composer’s words, “too light a mind usually harbours a heart that is too heavy!” Looking closer beneath the surface, the cross-relations between the “Tragic” Fourth and “lighter” Fifth become all the more evident. The players of the B’Rock Orchestra present these works on period instruments; transparent, but full of fire.

The period instruments bring a litheness and transparency, with vigour in the third movement allegro molto [in No. 5], the more pastorally phrased interlude liltingly done by the B’Rock, before the fair clip – and some wilfully eccentric time-keeping – of the final Allegro vivace.

One commodity that is never in short supply in René Jacobs and B’Rock’s Schubert symphony survey is excitement. Period strings tick nervily through outer movements, sforzandos thrust and sting, and hard sticks rebound off timpani like gunshots.

they maximise the potential of these works with raw, restless performances.