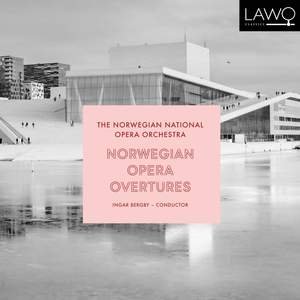 Into the pot go Norwegian folk music, Wagnerian echoes, a squeeze of Massenet, a sliver of Sibelius – a conservative mixture on the whole, poured over librettos largely drawn from national legends... — BBC Music Magazine, Christmas 2021, 4 out of 5 stars More…

The Norwegian opera literature is a well concealed and all too little known gem in our national cultural heritage.

There is general agreement that it begins with the Waldemar Thrane/Henrik Bjerregaard Singspiel "Fjeld-eventyret" (The Mountain Story) from 1824. And throughout the nineteenth century there were a number of Norwegian composers who wrote operas, most of them now long forgotten.

With this release, Lawo wishes to make the music accessible to listeners in the hope of generating new interest in and discussion about why this part of our cultural heritage has been left to lie untouched.

The recording would never have seen the light of day without retired conductor Terje Boye Hansen's untiring efforts on behalf of Norway's musical heritage and Norwegian opera literature.

Performed as you would expect, by the Norwegian National Opera Orchestra for added authenticity.

Into the pot go Norwegian folk music, Wagnerian echoes, a squeeze of Massenet, a sliver of Sibelius – a conservative mixture on the whole, poured over librettos largely drawn from national legends and dramas...it’s always fun peeping behind a curtain, and Bergby’s team play with such flair.

A real labour of love from the Norwegian National Opera’s former conductor Terje Boye Hansen, this splendidly-performed collection of seven overtures and two dances made me avid to experience all of these forgotten works in their entirety; highlights include the Sibelius-esque music from Catharinus Elling’s Kosakkene (1894) and the Mendelssohnian overture to Martin Andreas Udbye’s Fredkulla (1859).