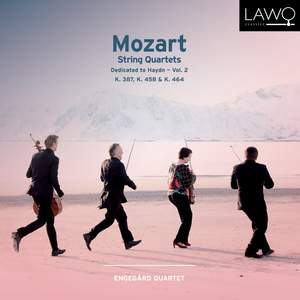 the music’s range and richness of invention seem to be endless, yet never forced, qualities that are happily conveyed at every point by this Norwegianbased quartet. Their collective approach... — BBC Music Magazine, December 2021, 4 out of 5 stars More…

With this release, the Engegard Quartet completes its recordings of the six string quartets that Wolfgang Amadeus Mozart dedicated to his paternal friend Joseph Haydn.

Written in Vienna in Mozart's "mature" years from age 25 until he died at 36 years old in 1791 they are a gift to a friend that hardly has its equal.

He worked on them alongside many other works from 1782 to 1785 and proudly presented them to friends and colleagues, often in his own home. His own son believed he would have become immortal had he written nothing else.

Mozart was himself a remarkable violinist and violist. His father Leopold made him aware that being as brilliant a violinist as pianist was simply a matter of will. There are solo passages in his divertimenti requiring exceptional virtuosity on the part of the concertmaster, passages he very likely performed himself. He played the quartets with some of Vienna's best musicians. Joseph Haydn, himself an able violinist, was among them.

The level of sound was weaker than that of the Engegard Quartet. The instruments had sensitive gut strings, and the rather straight bow had fewer horsehairs than today. In addition, with probably less string tension, the instruments had a gentler feel, and the playing technique was somewhat different.

The notation of Mozart's "Haydn quartets" is very precise and remarkably detailed; does this mean that one never strayed from the text? The earliest musician for whom we have recordings pianist Carl Reinecke, born in 1824 treats Mozart's text very freely, and Mozart himself was known for his brilliant spontaneity.

the music’s range and richness of invention seem to be endless, yet never forced, qualities that are happily conveyed at every point by this Norwegianbased quartet. Their collective approach is subtly different for each work in line with its overall tone…Engegård is a commanding personality, of the engaging kind who makes things happen around him without in any way domineering proceedings.