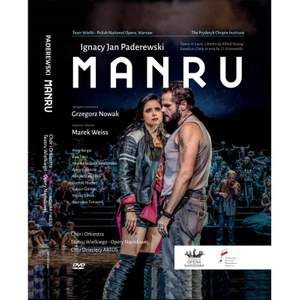 In this modern-dress production, all the roles are performed with conviction and the tensions inherent in the piece are painfully exposed. Ewa Tracz realises Ulana’s mix of strength and vulnerability,... — BBC Music Magazine, November 2021, 5 out of 5 stars (Performance) / 4 out of 5 stars (Picture & Sound) More…

"I have seldom worked on anything with greater pleasure and interest" Paderewski observed in the final months of composing Manru in 1900.

Paderweski's opera in three acts based on the novel 'The Cottage outside the Village' by Jozef Ignacy Kraszewski with the libretto written by Alfred Nossig.

The story of love doomed to defeat in confrontation with convention and traditional social norms, powerless in the face of prejudice and deeply rooted superstitions, is essentially a warning against xenophobia and intolerance a treatise on the crushing force of the community.

Paderewski chose the novel by Jozef Ignacy Kraszewski deliberately: published shortly before he was born, it touches upon themes especially dear to the enlightened and open mind of the composer, to whom issues of mutual respect, social unity and appropriate understanding of cultural diversity were of the utmost importance, while the need to enlighten the rural population inspired many of his activities.

It was in the country people, in an ideal world dedicated to community work and upholding the best traditions, that he saw one of the foundations of the re-emerging strong Polish state.

Paderewski as an opera composer achieved an unprecedented success in his lifetime, the likes of which was denied to all other Polish stage composers. After the triumphant world premiere at the Koniglisches Opernhaus in Dresden on 29 May 1901.

The opera took many other European and American theatres by storm. They included the Metropolitan Opera, whose regular repertoire never neither before nor afterwards included any other opera by a Polish composer.

The debt we owe to Paderewski's Manru is yet to be repaid: despite CD and DVD recordings, the score is still not well-known enough - it's not just that so few recordings are available, but that both the above-mentioned ones lack reverence for the letter of the score, which has been drastically shortened. This Warsaw production is the first step towards a complete presentation of the great composer's opus magnum.

In this modern-dress production, all the roles are performed with conviction and the tensions inherent in the piece are painfully exposed. Ewa Tracz realises Ulana’s mix of strength and vulnerability, with Peter Berger displaying the conflict at the centre of Manru’s personality...Nowak marshals the substantial forces of the Polish National Opera with consistent fervour.