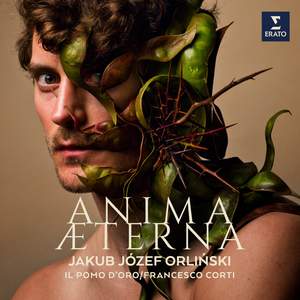 Anima Aeterna, an adventurous album of sacred arias and motets from the 18th century, follows in the vein of Anima Sacra, which in 2018 decisively announced Jakub Józef Orliński’s arrival as a recording artist. Its programme – music by Zelenka, Handel, Fux, and the little-known Gennaro Manna, Francisco António de Almeida, Bartolomeo Nucci and (on the LP version) Davide Perez – contains several world premiere recordings. Joining Orliński in Zelenka’s sparkling ‘Laetatus sum’ is the captivating soprano Fatma Said, and Francesco Corti conducts the orchestra and chorus of Il pomo d’oro. Orliński feels that “the shades and colours to be heard in in sacred music of baroque era touch people’s souls, even today. Anima Aeterna means ‘eternal soul’, which for me means nature … Something so vital, wild and dangerous, yet also so calm, mesmerizing and healing.”

Be prepared for some dazzling displays…in Zelenka’s psalm setting ‘Laetatus sum’, Orlinski is partnered by the assured, pliant and blended singing of Fatma Said…[Nucci's] aria ‘Un giusto furore’ with its exhilarating dialogue between solo trumpet and voice is one of the disc’s major attractions.

An album that reinforces Orliński as one of the most striking young talents not just in countertenor singing but in Baroque music more broadly.

Orliński is all earth and fire, launching into Zelenka’s roulades with athletic vigour, dipping down into his strong lower register to great dramatic effect when required, and having a blast in the brassy sparring with solo trumpet in an aria from Bartolomeo Nucci’s Il David trionfante towards the end of the disc.

The perfect recipe for a successful production: outstanding voices...and an orchestra and a conductor perfectly attuned to the specificity of baroque music, and repertoire featuring several world premieres and other less known pieces. Orliński, one of the greatest countertenors of our time, shows not only excellent vocal abilities, but also a rare musical intelligence. A must-have for all those who love baroque music.