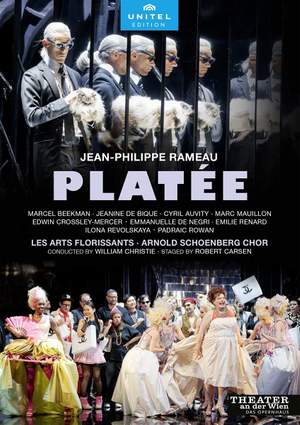 Jean-Jacques Rousseau hailed “Platée” as “the best musical play ever to be heard in our theatres.” In Robert Carsen’s production, the mythological events take place in the world of Parisian haute couture and Jupiter is portrayed as the fashion god Karl Lagerfeld (1933-2019) – who has now really been transferred up to Olympus. This ingeniously apt transposition of this satirical opera into the modern day has long been a hit! The renowned specialist in baroque music, William Christie, conducts his Les Arts Florissants, the Arnold Schoenberg Chor and a fantastic cast. “A candy-coloured baroque dream” Salzburger Nachrichten // “A must-see - and not only for fashion freaks!” Bühne BONUS: Interviews with Marcel Beekman, Nicolas Paul (Choreographer), Gideon Davey (Set and Costume Designer), William Christie and Robert Carsen