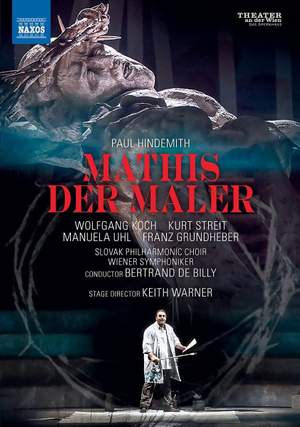 [Koch's] gentle charisma and sonorous vocal expressivity call to mind his own performances of Hans Sachs and, by extension, suggest a parallel between Mathis and Sachs...The score has a reputation... — Opera, November 2021 More…

Hindemith conceived Mathis der Maler, his opera in seven tableaux, as a reimagining of Matthias Grünewalds Isenheim Altarpiece, a depiction of Christ's intense suffering and crucifixion. Set during the turbulence of the German Peasants revolt in the early 16th century, the works focus is on artistic freedom of expression and human isolation during a time of plague, repression and violence. Hindemith wrote his own libretto finding in Grünewald a metaphor for his own times. Performances of the opera in Germany were duly banned by the Nazis.

[Koch's] gentle charisma and sonorous vocal expressivity call to mind his own performances of Hans Sachs and, by extension, suggest a parallel between Mathis and Sachs...The score has a reputation for toughness yet unfolds here with wonderful luminosity under the baton of Bertrand de Billy. An essential release, especially since it is the only performance of the work on DVD.

Warner’s production…is full of telling detail…All the protagonists are portrayed with touching truthfulness too…It’s superbly conducted by Bertrand de Billy, making the most of the opera’s visionary moments, and doing his best with its occasional longueurs. As the only version of the opera available on DVD and Blu-ray, it’s self-recommending for Hindemith fans.