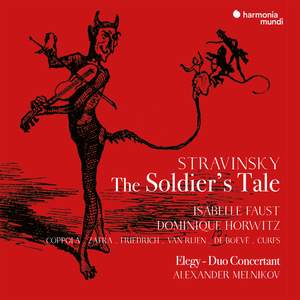 It’s rounded, intensely vocal, intimate, incredibly sophisticated – not the usual, but very welcome, as if the whole thing were an ethereal fairytale...It’s your choice which language version... — BBC Music Magazine, December 2021, 5 out of 5 stars More…

Stravinsky: The Soldier's Tale, Part I Scene I

Phew… This isn't a bad sort of spot

Music to Scene 1. Airs by a stream

Hurray! Here we are!

Ah, you dirty cheat! It's you!

Music to Scene 3. Airs by a stream (reprise)

Good to touch, good to feel

Now he comes to another land

It went off just as we thought it would

Dance of the Devil

Suppose, suppose we went there!

Deeply scarred by the First World War and by the upheavals of the October Revolution in his homeland, Stravinsky found, with the help of the Swiss author Ramuz, a subject that resonated perfectly with his era.

In this music theatre piece inspired by an old Russian folktale, The Deserter and the Devil, the composer of The Rite of Spring explored new paths in the last months of the First World War, which would soon lead him to a very personal form of neo-classicism.

With this English version, in which Dominique Horwitz plays all the spoken roles in masterly fashion, the musicians assembled by Isabelle Faust have taken up the challenge of performing on instruments contemporary with the premiere.

As a result, the work reveals its true personality and its immensely original colours, keen and biting.

It is coupled here with two unjustly neglected gems by its composer, to mark the Fiftieth Anniversary of his death.

It’s rounded, intensely vocal, intimate, incredibly sophisticated – not the usual, but very welcome, as if the whole thing were an ethereal fairytale...It’s your choice which language version you invest in, but don’t miss the musical wonders.

Faust and her colleagues do indeed evoke the mise en scène of performers pulling up in a dusty square late one afternoon and performing from the back of an old truck.

This is as lively and characterful a performance as you’re ever likely to hear – as well as the most historically authentic that I’m aware of Each member of the septet plays on an instrument dating from the period of the work’s composition (with the exception of Faust’s Stradivarius and Wies de Boevé’s double bass). This is particularly noticeable in the wind and percussion, where the soundworld is distinctively different from what modern instruments would create.