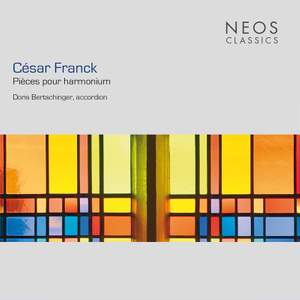 As early as 185866, Franck had composed first an "Offertoire" and "5 Pieces" for harmonium, then 44 further "Petits pieces" for organ or harmonium. More than two decades followed, before Franck, in the last two years of his life, began a project for harmonium that remained unfinished only because of his death: a cycle of harmonium pieces comprising 12 suites of seven pieces on all 12 pitches. The posthumous publication of the unfinished cycle of 59 pieces, to be performed on either organ or harmonium, is entitled "L'Organiste, Pieces pour Orgue-Harmonium par Cesar Franck".

"In my interpretation, it is important for me to respect and point out the common features and similarities of the harmonium and accordion but also the differences between the two instruments. Already whilst studying for my degree, I was inspired by the "Pieces pour harmonium", as Franck himself called them, and their interpretation on the accordion. With this recording, I would like to make Cesar Franck's work as well as the classical accordion and its possibilities known to a wide audience." (Doris Bertschinger)