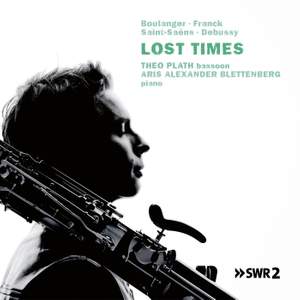 I. Allegro vivo (Arr. for Bassoon and Piano)

I. Modéré (Arr. for Bassoon and Piano)

I. Allegretto ben moderato (Arr. for Bassoon and Piano)

THEO PLATH is a young bassoon player who won the ARD competition in 2019, is now the principal on the HR Symphonie Orchestra Frankfurt. Limited by the range of scores for his instrument, he dreamt of playing those lovely romantic tunes as others do leading him to make these arrangements of famous chamber music pieces.

"I always found that the music of Impressionism and Late Romanticism was an object of longing for me as a bassoonist; Saint-Saëns was one of the few composers of his time who helped to expand the repertoire of "one of these otherwise so neglected instruments. With this CD I have fulfilled my personal dream to revel in the music of Romanticism and Impressionism, an era otherwise mostly lost for the bassoon as a solo instrument."

As a prizewinner at the renowned ARD International Music Competition in Munich in 2019, and as Principal Bassoon of Frankfurt HR Radio Symphony Orchestra, Theo Plath is fairly in demand as a soloist, and player for chamber music and orchestra.

The year 2020 saw the release of his debut CD with bassoon concertos by Weber, Jolivet, Bitsch and Crusell, a recording he made with the German Radio Philharmonic Orchestra (Deutsche Radiophilharmonie) under the baton of Leo McFall.

Theo has made appearances in solo bassoon concertos with the Munich Chamber Orchestra and the Frankfurt HR Radio Symphony Orchestra, among others, and in concert halls including Dortmund Konzerthaus and Hamburg Elbphilharmonie.