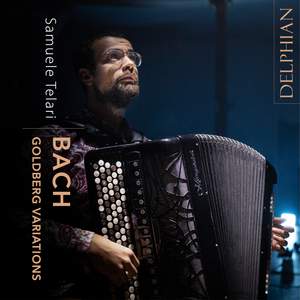 There’s no questioning the suitability of the two-manual accordion in taking on the Goldbergs, given the work’s two-manual harpsichord origins, and Telari sticks closely to Bach’s musical expression.... — BBC Music Magazine, October 2021, 3 out of 5 stars More…

‘This recording’, says accordionist Samuele Telari, ‘is one that I felt compelled to make. Every time I play Bach’s Goldberg Variations I realise that something changes inside me, and as a consequence in my interpretation as well. The piece is a kind of mirror into which I can look and see what is inside me. Finally, after performing it many times in concert over several years, I felt ready to x a version in a recording.’

Telari’s instrument is essential to his conception of this eternally fresh, kaleidoscopic work. The accordion’s bellows bring out and intensify dynamic contrasts in the slower variations, while the sparkling, faster ones are powered by a pure virtuosity that ows along the two manuals, imitating or chasing one another in resonant stereophony.

There’s no questioning the suitability of the two-manual accordion in taking on the Goldbergs, given the work’s two-manual harpsichord origins, and Telari sticks closely to Bach’s musical expression. It’s quite a feast of solo accordion, however, which might be best sampled in short sittings.