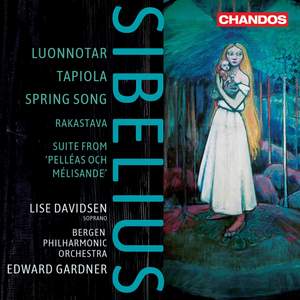 I. At the Castle Gate

III. At the Seashore

IV. By a Spring in the Park

VII. Mélisande at the Spinning Wheel

IX. The Death of Mélisande

II. The Path of His Beloved

Recording of the Week,  Sibelius from Edward Gardner, the Bergen Philharmonic, and Lise Davidsen

The Norwegian soprano combines drama and delicacy in the tone-poem Luonnotar, whilst the Bergen string sound in Tapiola, Rakastava and Pelléas & Mélisande is a thing to marvel at.

Following their acclaimed recordings of Schoenberg with Sara Jakubiak and Britten’s Peter Grimes with Stuart Skelton, Edward Gardner and the Bergen Philharmonic turn their attention to the music of Sibelius. Written in 1913 for the diva Aino Ackté, the tone poem Luonnotar draws on text from the Finnish national epic poem, the Kalevala. Its virtuosic demands are ably met here by award-wining soprano Lise Davidsen, who also feature in the Suite from Pelléas and Mélisande, music re-worked by Sibelius from his incidental music written for the first performances of Maeterlinck’s play in Helsinki, in 1905, in Swedish. The tone poem Tapiola, from 1926, is Sibelius’ last great masterpiece and evokes the forests of his native Finland. The programme is completed by a pair of much earlier works, Rakastava (the Lover) and Vårsång (Spring Song). The album was recorded in Surround Sound and is available as a hybrid SACD.

[Davidsen's] breath control and even fullness of tone across a two-octave range prove radiantly equal to Sibelius’s uncompromising demands.

Davidsen’s name pings out of the album cover but make no mistake, its real star is the Bergen Philharmonic Orchestra’s string section...Bergen’s woody, thoroughbred strings are most identifiable in ‘The Death of Mélisande’.

Davidsen has it all, and it’s wonderful to hear her in Nordic repertoire at last...The strings’ incredible palette of colours continues to be a thing to marvel at throughout the rest of the programme...All in all, this is a glorious recording which speaks of a real synergy between conductor, orchestra and repertoire, with Davidsen’s contribution the icing on the cake.

Gardner’s Tapiola is less bleak and brooding than some readings, but still fabulously atmospheric, and he’s equally convincing in evoking the mysterious atmosphere of Luonnotar, in which the soloist is the current flavour-of-the-month among dramatic sopranos, Lise Davidsen.