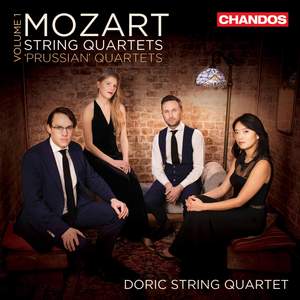 The Doric Quartet emphasises [the works'] unpredictability with their vivid and insightful interpretations that bristle with life and character. Although employing a wide palette of timbres...they... — BBC Music Magazine, September 2021, 4 out of 5 stars (Performance) / 5 out of 5 stars (Recording) More…

Towards the end of his life, short of money and heavil y in debt, Mozart had the opportunity to visit King Friedrich Wilhelm II of Prussia – a famous patron of the arts and a keen and above-average musician. Mozart performed for the King and left with some cash and a commission for a set of six string quartets, of which these are the only three he completed. They are ground-breaking in the way in which Mozart utilised the voicing of the instruments. King Friedrich was a viola da gamba player turned cellist, and these works feature extensive melodies for the cello, usually in a high register, thus emancipating the cello from the bass line and introducing a more evenly blended texture. Firmly established as one of the leading quartets of their generation, the Doric String Quartet enjoys a worldwide reputation and has performed at festivals and concert halls around the globe. Exclusive Chandos artists, the Quartet has drawn widespread critical acclaim for its recordings and won a number of prestigious awards.

The Doric Quartet emphasises [the works'] unpredictability with their vivid and insightful interpretations that bristle with life and character. Although employing a wide palette of timbres...they take infinite care to make the textures sound as light and clear as possible, and their commendable observance of all the repeats in first movements and finales enhances the overall stature of each work.

Their collective tone is both sweet and sinewy, with vibrato used for expressive effect rather than as a default setting. Contrapuntal textures are ideally lucid.