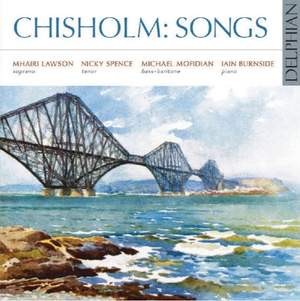 Chisholm, E: Another Incitement for the Gales

Chisholm, E: To His Love Whom He Has Kissed Against Her Will

Erik Chisholm made his home as a musician in South Africa but it was in the Gaelic folk tunes of his native Scotland that he found lifelong inspiration for his songs.

Modern yet instantly accessible and engaging, and revelling in the Scots language, their apparent simplicity belies the composer’s sophisticated craftsmanship.

The master of twentieth-century song, Iain Burnside, and three of the brightest stars in the rmament of Scottish singers bring out the individual characters of these pieces, by turns haunting, tender and irreverent, making of each one a uniquely coloured little jewel.