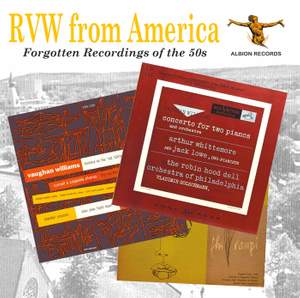 Pre-order, RVW from America: Forgotten Recordings of the 50s

This compilation from Albion records brings a number of premire recordings of works by Ralph Vaughan Williams from the LP era to a digital format for the first time.

The Concerto for Two Pianos was recorded in 1950 by the famed American piano duo Arthur Whittemore and Jack Lowe, with Vladimir Golschmann and the Robin Hood Dell Orchestra. The Concerto was originally written for just one piano, and the version for two pianos followed; this is the first recording of it in either version. The power of this performance underscores the percussiveness of Vaughan Williams's writing for the piano and his homage to Busoni's Bach transcriptions, but captures, as well, the lyric outpouring of the lovely Romanza movement.

Robert Hull, then the director of music at Cornell University, counted among the influences on his conducting the tutelage of Pierre Monteux, Eugene Ormandy, and George Szell. His recording of the exotic, impressionistic Flos Campi was made in 1952 with his acclaimed Cornell A Cappella Choir and Francis Tursi, long-time Eastman School faculty member and one of the finest violists of his time. Vaughan Williams knew this recording and recommended it (which, in itself, makes it a rarity).

A year later Hull led his choir and the Rochester Chamber Orchestra in the first-ever recording of the Fantasia (quasi variazione) on the 'Old 104th' Psalm Tune, an innovative and stirring setting of the familiar Ravenscroft hymn of praise written in 1949 by the then 77-year-old composer. British pianist John Hull, visiting professor at Cornell and a familiar artist to a generation of BBC Radio listeners, provided commanding virtuosity for the demanding piano solo of the Fantasia.

Additionally, there are three folk song arrangements for chorus, one of which (John Dory) was also a first recording in 1953.