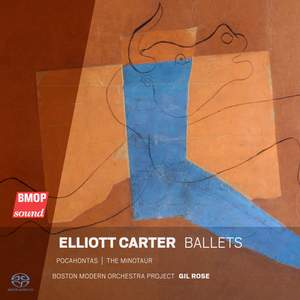 Both pieces are packed with ideas, often tumbling over one another. Fortunately they don’t seem to get in each other’s way. — Fanfare, September/October 2021

Recorded by Boston Modern Orchestra Project and conducted by Gil Rose, Ballets showcases two ballet scores - The Minotaur (1947) and Pocahontas (1939) - from two-time Pulitzer Prize winner Elliott Carter. Carter, who died in 2012, was one of the most respected composers of the second half of the 20th century. Combining elements of European modernism and American “ultra-modernism”, he developed a distinctive style. Carter revealed to The Composer’s Choices in 1960 how Pocahontas (1938), was his first large orchestral work. He said: The overall style - made up of irregular rhythms, dissonant harmony, and a combination of diatonic and chromatic elements - has remained fairly constant. “The construction of phrases here already shows a tendency to change character quickly, a feature that became much more important in my later works. “Pocahontas, now so easy to listen to, was considered difficult to play and to hear at its first performance in 1939, and was received very coldly indeed by the public and the critics.” Talking in 1991 about the creation of 1947’s Minotaur, he revealed: “The basic idea was to create a kind of balletic picture of the concentration camps. This idea already had a certain currency, because everyone had just become aware, in that period right after the Second World War, of the horrible things that had taken place. The Minotaur devouring its victims in the labyrinth was of course symbolic of it all.” The complete score for The Minotaur was not recorded until 1990 (by the New York Chamber Symphony conducted by Gerard Schwarz) and the complete original music for Pocahontas had never been recorded - until now. Talking about these ballets, conductor Rose said: “He could really write a lush orchestration, and with a big string section. In both of these ballets, the sophisticated use of harmony and rhythm foreshadows the stuff to come... He’s obviously a brilliant composer.”

Both pieces are packed with ideas, often tumbling over one another. Fortunately they don’t seem to get in each other’s way.