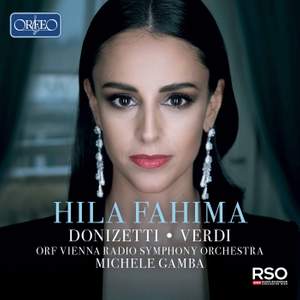 Donizetti: Prendi, per me sei libero (from L'Elisir d'amore)

Having joined the ensemble of Deutsche Oper Berlin at the age of 22 and the ensemble of Wiener Staatsoper in 2013, Israeli-born Hila Fahima presents a mix of well-known selections and rediscovered treasures on her debut album: Donizetti’s Lucia, Norina, Linda di Chamounix, Adina, Marie from La fille du regiment, plus Verdi’s Gilda – she will be starring in this role at this year’s Bregenz Festival – and also Amalia from his I masnadieri, as well as arias from Donizetti’s little-known operas Rosmonda d’Inghilterra and Emilia di Liverpool.