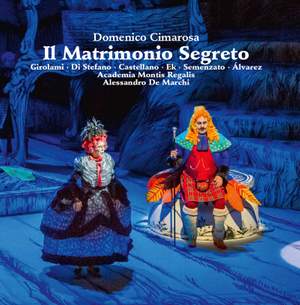 Il matrimonio segreto is the only opera that has ever had the honor of being repeated in full at its premiere, so very much did the comical musical goings-on please its distinguished audience. On the occasion of the fortieth anniversary of the Innsbruck Early Music Festival Weeks, the conductor Alessandro De Marchi again at long last led a performance of Cimarosa’s most popular opera in historical performance practice and in original sound. The music forms a direct transition from the Baroque opera to the Bel Canto era of Rossini and in every way merits a production in which the musical and vocal practice of Cimarosa and Mozart’s times is brought back to life. Nowadays Cimarosa’s opera is always heard in greatly abbreviated versions; repetitions and parts of arias often end up being eliminated. Alessandro De Marchi: 'Though precisely these repetitions are interesting because in them the female and male singers, just as then was still the practice, are able to vary and improvise.' The orchestral sound is also more colorfully and sharply contoured when original instruments are used. For the anniversary occasion everybody was supposed to have good reason to laugh, and this opera is optimally suited toward this end. The tradition of the opera buffa, with its origins going back to the commedia dell’arte, in this work experiences a 'high point full of irresistible moments of fun, on the stage and in the music' as De Marchi puts it.

This spirited performance captures the playfulness and affectionate tone of Cimarosa’s comedy.

It is an exceptionally likeable performance that captures well the exuberance of the opera while not ignoring the odd moments of more serious sentimentality...Alessandro De Marchi’s pacing of the score is exemplary, full of wit and sparkle, with recitatives moved forward with point and purpose. His Academia Montis Regalis plays with airy verve.