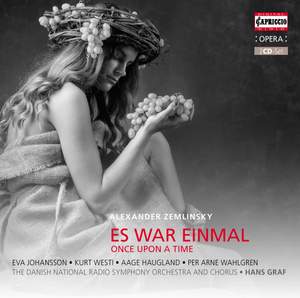 New,   Offer, Zemlinsky: Es War Einmal (Once upon a time)

Was geht's mich an (2021 Remastered Version)

By the 1890s, Zemlinsky had already acquired a reputation as a promising young composer and pianist. In October 1897, Gustav Mahler had become director of the Vienna Hofoper and was determined to do what he could to help him. Mahler worked his way through Zemlinsky’s opera Es war einmal alongside the young composer with characteristic energy, advising on and making changes in the music and the libretto. The resulting score provides a fascinating and little-explored document for studies of both Zemlinsky and Mahler. Es war einmal received its first performance under Mahler on 22 January 1900. To mark the 150th anniversary of Zemlinsky’s birth, Capriccio presents a newly remastered edition of the opera’s legendary first recording which was made in 1987.