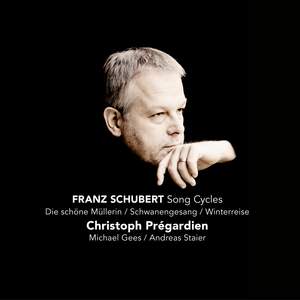 My desert-island choice for a highly cultivated yet quite personal tenor-voice foray into Schubert’s world. — Gramophone Magazine, September 2021

This box brings together the three famous Lieder cycles by Franz Schubert performed by Christoph Pregardien.

During the last two decades, Christoph Pregardien has been one of the most important and interesting voices confronting this engaging repertoire. He has taken an innovative approach in the history of interpretation, a way of singing that is linked to his consolidated experience as a Baroque tenor.

When first issued, the three discs met with the unanimous acclaim from critics and consumers.

"While it is absurd to speak of an outright "winner" in such a crowded field, Pregardien and the ever-illuminating Staier join Schreier, Fischer-Dieskau and Brigitte Fassbneder on my roster of indispensable Schwanengesang recordings." (Gramophone)

"The Voice is in superb form, sensing out the underlying pulse and the minutest inflections of longing, delight, determination and soul-weariness within each lithe, live line of melody." (Die Winterreise, BBC Music Magazine).

"This is beautiful singing by a master of his craft, and Pregardien brings to the cycle his early-music-specialisation qualities of precise diction, tuning and articulation." (Die Winterreise, Early Music Review)

My desert-island choice for a highly cultivated yet quite personal tenor-voice foray into Schubert’s world.