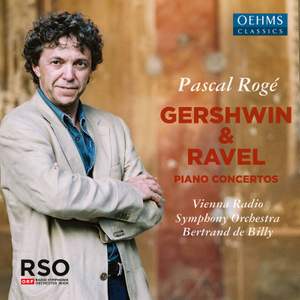 While the Vienna Radio Symphony Orchestra may not quite command the rhythmic ‘lift’ American orchestras bring to Gershwin’s rhythms, their participation in his Piano Concerto is crisp and colourful.... — BBC Music Magazine, August 2021, 4 out of 5 stars (Performance) / 3 out of 5 stars (Recording) More…

The award-winning French pianist Pascal Rogé presents a programme of music by Gershwin and Ravel in a recording with the Vienna Radio Symphony Orchestra under Bertrand de Billy. Rogés affinity for the French style and empathy with jazz make him particularly suited to this repertoire. His recordings of French piano music have received Gramophone, Grand Prix du Disque and Edison awards. In addition to the classical-romantic repertoire of the Viennese and German schools, 20th-century French music is also one of his specialities.

While the Vienna Radio Symphony Orchestra may not quite command the rhythmic ‘lift’ American orchestras bring to Gershwin’s rhythms, their participation in his Piano Concerto is crisp and colourful. It is enhanced by a spacious recorded balance that, while giving due prominence to Pascal Rogé’s idiomatic virtuosity, allows every orchestral detail to come through.

Rogé seems very much at home in the Ravel concertos…It’s no surprise that de Billy and the Vienna Radio SO, who have devoted annual festivals to American music, display a solid idiomatic grasp of Gershwin.