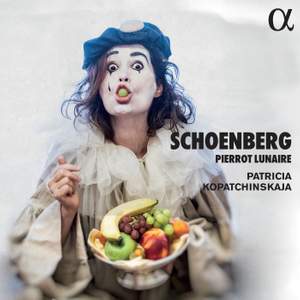 Kopatchinskaja’s approach – sharp-focus, hyper-detailed and searching out over-the-top extremes of vocal delivery – is remarkable in its way...The upside is the superlatively precise and stylish... — BBC Music Magazine, June 2021, 3 out of 5 stars (Performance) / 4 out of 5 stars (Recording) More…

For this special bonus episode of the podcast, Patricia Kopatchinskaja tells us about her longstanding relationship with Schoenberg's Pierrot Lunaire.

Pierrot lunaire, premiered in Berlin in 1912, is a series of twenty-one short melodramas for voice and five instruments on German translations of poems by Albert Giraud. Here the composer first introduces Sprechgesang (speech-song), a technique that revolutionised declamation. Schoenberg wanted the piece to be ironic, at once tender and grotesque, in the manner of cabaret songs. Patricia Kopatchinskaja, the violinist who is also an occasional actress, had long dreamt of playing and reciting this unique work. It was a pain in her arm preventing her from playing the violin that one day propelled her into the role of narrator: ‘All my life I have felt that I was Pierrot. Every time I played this piece on the violin when I was a student, I would say the words in my head.’ She has now played and performed Pierrot in many venues around the world, including the Berlin Philharmonie, several cities in the United States, the Netherlands, Switzerland and Sweden. Now she has assembled a number of her musician friends and decided to record it for posterity. Schoenberg’s Phantasy op.47 and Six Little Piano Pieces op.19 complete the programme, along with works by Webern ( Four Pieces for violin and piano op.7 ) and Schoenberg’s arrangement of Johann Strauss’s Kaiser-Walzer (Emperor Waltz) op.437.

Kopatchinskaja’s approach – sharp-focus, hyper-detailed and searching out over-the-top extremes of vocal delivery – is remarkable in its way...The upside is the superlatively precise and stylish accompanying of her chosen team of five young instrumentalists, who do justice to every shade of the score’s mind-boggling technical mastery and range of invention.

Patricia Kopatchinskaja gives a virtuoso performance, colorful and exciting with many sudden dynamic changes... This performance has an air of a trip—there and back, wherever there is...A marvelous disc, highly recommended.

Kopatchinskaja’s Pierrot may, I suspect, divide opinion, but this is nevertheless an engrossing, challenging disc that repays repeated hearings.

As you’d expect from such an outstanding musician, her performance is impressively accurate, the realisation of the sprechgesang spot-on in rhythm and pitch, while the playing of the hand-picked ensemble around her is equally precise...But other aspects of her approach certainly won’t be to all tastes, for she certainly pushes the idea of what expressionism can be to its extremes.