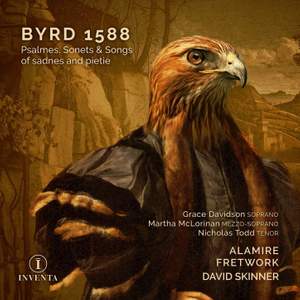 The real beauty of these readings...is the singers’ poetic nuancing of the texts, which they articulate with glassy clarity. The members of Fretwork play with characteristic grace, weaving gossamer... — BBC Music Magazine, July 2021, 5 out of 5 stars More…

Byrd: O God give ear and do apply

Byrd: Mine eyes with fervency of sprite

Byrd: O Lord, who in thy sacred tent?

Byrd: O you that hear this voice

Byrd: Although the heathen poets

Byrd: My mind to me a kingdom is

Byrd: If women could be fair - Ah, silly soul

Byrd: Who likes to love

Byrd: All as a sea

Byrd: Come to me, grief, for ever

Byrd: Even from the depth

Byrd: Blessed is he that fears the Lord

Byrd: How shall a young man prone to ill

Byrd: Help, Lord, for wasted are those men

Byrd: Lord in thy wrath

Byrd: Though Amaryllis dance in green

Byrd: I Joy Not In Earthly Bliss

Byrd: As I beheld, I saw a heardman wild

Byrd: What pleasure have great princes?

Byrd: The Match that's made

Byrd: Why do I use my paper, inke and penne?

Byrd: Care for thy soul

Byrd: If that a sinner's sighs

Byrd: O that most rare breast

Following Tallis and Byrd's first publishing venture of Cantiones Sacrae of 1575, Byrd waited some 13 years to again wake the AT52presses with his compositions. His 1588 Psalmes, Sonets, & songs of sadnes and pietie was his first solo publication, for which Elizabeth's Lord Chancellor (and notable favourite), Sir Christopher Hatton, acted as patron. This is the first complete offering of the collection and was recorded on the grounds of Holdenby House, once the largest Elizabethan country house in all of England. Written at the height of Byrd's creativity, it contains a treasure trove of musical delights. More famous among the collection includes two funeral elegies for Sir Philip Sidney (Come to me grief forever and O that most rare breast), Why do I use my ink, paper and pen? which is thought to allude to the martyrdom of the Jesuit Edmund Campion in 1580, as well as lighter secular songs from joyful madrigals to pained laments. Byrd here represents practically all levels of human emotion, with works performed by a variety of 'voyces or Instruments' as the composer himself directs.

The real beauty of these readings...is the singers’ poetic nuancing of the texts, which they articulate with glassy clarity. The members of Fretwork play with characteristic grace, weaving gossamer textures around the voices. In sum, the performances, masterminded by scholar and director David Skinner, are a delight from start to finish.

Variety is built in; and as one expects from these interpreters, the performances are seldom less than immaculate. The vocalists do especially well.