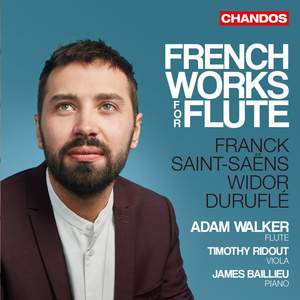 The former LSO principal flautist’s Chandos debut focuses on French flute works. His clear, considered sound refuses to retreat into the background. The sound spins – this would be a superb recital... — BBC Music Magazine, June 2021, 4 out of 5 stars More…

French Works for Flute is the Chandos début of Adam Walker, ably accompanied by James Baillieu. The pair are joined by the violist Timothy Ridout in Duruflé's Prélude, récitatif et variations. At the forefront of a new generation of wind soloists, Adam Walker was appointed principal flute of the London Symphony Orchestra in 2009 at the age of twenty-one. In 2010 he won a Borletti-Buitoni Trust Fellowship Award and was shortlisted for the Royal Philharmonic Society Outstanding Young Artist Award. He is visiting professor at the Royal College of Music. Judged by The Daily Telegraph to be 'in a class of his own', James Baillieu is one of the leading chamber pianists and accompanists of his generation. Built around three major works (Widor's Suite, Jean-Pierre Rampal's edition of Franck's Violin Sonata, and Duruflé's flute trio), the programme proves an excellent showcase for Walker's prodigious talent – effortless virtuosity, ethereal sound, and above all outstanding musical expression.

The former LSO principal flautist’s Chandos debut focuses on French flute works. His clear, considered sound refuses to retreat into the background. The sound spins – this would be a superb recital to hear live.

Walker’s clear, cool, bright tone, effortless technique and finely nuanced expressiveness will win you over whether or not you naturally gravitate towards solo flute.