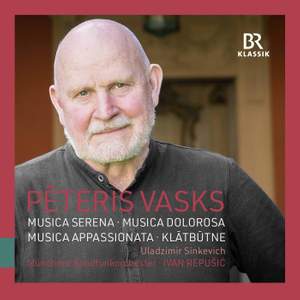 Three of Vasks’s cycle of four ‘musicae’ for string orchestra are given radiant performances...Each work has a different emotional impetus but all f low with an immediate, searing lyricism from... — BBC Music Magazine, June 2021, 5 out of 5 stars More…

All the works of the Latvian composer Pēteris Vasks on this CD are written for string orchestra: the three connected compositions 'Musica serena' (2015, dedicated to the Finnish conductor Juhga Kangas), 'Musica dolorosa' (1983) and 'Musica appassionata' (2002), and also Vasks' Concerto No 2 for Violoncello and Strings, also known as 'Klātbūtne' ('Presence', 2011/12). Vasks' three instrumental pieces here are light-hearted, tragic (dealing with the death of his sister as well as the political situation in Latvia at the time), and passionate, providing an overview of the diversity of his work across a timespan of almost three decades. His deeply spiritual Cello Concerto, which was premiered by Sol Gabetta and the Amsterdam Sinfonietta and conducted by Candida Thompson in Ghent, refers in its title to the pure being of his music - which is present, without distance, in every movement of the bow. Today, alongside Arvo Pärt and Erkki Sven-Tüür, Pēteris Vasks is one of the most famous composers from the Baltic states of the former Soviet Union. – On April 16, 2021, the music world will celebrate his 75th birthday.

Three of Vasks’s cycle of four ‘musicae’ for string orchestra are given radiant performances...Each work has a different emotional impetus but all f low with an immediate, searing lyricism from Vasks’s long-established combination of stark anguish and ethereal yearning.

Whatever the level of the music, these Bavarians and their recording engineers have found a resonant sound style for Vasks’s music, which is surely his biggest interpretative challenge.