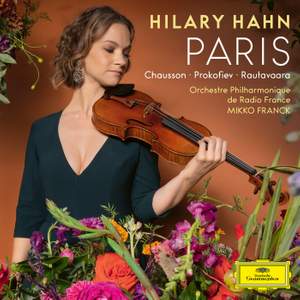 Hahn praises the Orchestre Philharmonique de Radio France as one where ‘emotion is embraced rather than exaggerated’, and the disc is an embodiment of this crucial virtue...She admits [the Prokofiev... — BBC Music Magazine, April 2021, 5 out of 5 stars More…

Paris is Hilary Hahn’s comeback project after her one-year sabbatical. Now Hilary is back with her first album on Deutsche Grammophon in five years.

The new album features Poème for Violin and Orchestra by Parisian-born composer Chausson; Prokofiev’s Violin Concerto no.1, first performed in Paris; and the world-premiere recording of Rautavaara’s final score, Deux Sérénades, written for and premiered by Hahn, the Orchestre Philharmonique de Radio France and its Music Director, Mikko Franck. With this project Hahn pays tribute to the rich cultural heritage of a city that has been close to her heart throughout her career.

“Paris,” says Hahn, “is about expression, it’s about emotion, it’s about feeling connected to a city and a cultural intersection, in a way that’s inspiring for the player and the listener. It has Parisian threads all the way through it. But it’s also a big reference to the arc of my career. I’ve been playing in Paris since I was a teenager.”

Hahn praises the Orchestre Philharmonique de Radio France as one where ‘emotion is embraced rather than exaggerated’, and the disc is an embodiment of this crucial virtue...She admits [the Prokofiev is] technically difficult, though you wouldn’t know it as her poise and silvery tone survive unscathed...The Chausson Poème is a joy from start to finish.

I doubt whether [the Prokofiev] has ever been played ‘better’ than it is here. While others find additional pockets of charm and tenderness, few demonstrate Hahn’s grip on the argument.