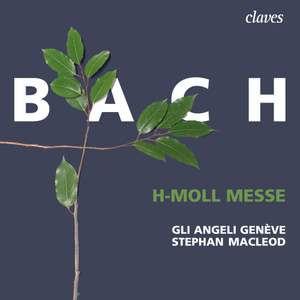 Bach: Mass in B minor

For years now, musicology and musicians have been addressing the question of the vocal forces that Johann Sebastian Bach had at his disposal for his cantatas and passions. With the help of occasionally newly discovered sources and in-depth studies, we have been able to find enlightening answers to a problem that is essential for the interpretation of his music.

From its creation in 2005, Gli Angeli Genève has approached Bach’s music with two singers per part: i. e. eight singers for most of the cantatas, eight singers for the St John Passion, sixteen for the St Matthew Passion and its two choirs (as our recording published by Claves in April 2020 shows), ten for the Magnificat (where the choirs have five parts) or for the Mass in B minor (where a complement of twelve singers would be more logical because of the six-part Sanctus). Two singers per part in the choirs is the number of singers in Carl Philip Emmanuel Bach’s choir for many of his great oratorios, and the number of singers in Joseph Haydn’s choir for many of his masses. But here again, these historical realities are not the basis of our approach and choice. A musician may be justified in his need to legitimize his aesthetic choices by his knowledge of history, but if the search for authenticity becomes the sole driving force behind his work, he may go astray. It is therefore another factor that attracts and motivates us.