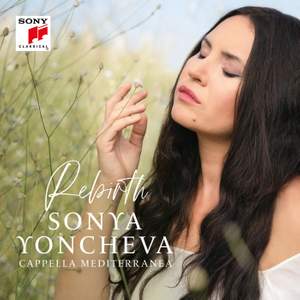 Yoncheva’s voice is justly famous for its rich, languorous tone that has transfigured many passionate roles from Monteverdi’s Poppea to recent heroines on her Handel and Verdi discs, and to her... — BBC Music Magazine, June 2021, 4 out of 5 stars More…

Recorded during the first Corona lockdown, Sonya Yoncheva's project emerged from silence with an urge for a "rebirth that our world desperately needs at present, something that it achieves by drawing on the very deepest recesses of the human psyche and on its origins in music and the arts". - SY

With Rebirth Sonya Yoncheva also introduces her listeners to the contemporary message and the timeless quality of Baroque music. On her new album she spans an arc from 1600 to the modern age of pop with works by Italian, English and Spanish composers including Alessandro Stradella, Claudio Monteverdi, Tomás de Torrejón y Velasco to ABBA's hit "Like an Angel Passing through my Room".

The album also includes a much praised piece from her homeland Bulgaria "Zableinano mi agunce". "Most beautiful melodies ... an unforgettable emotional experience" wrote the FAZ, Germany.

"Music that moves you to tears" wrote the APA after her first concert at the Salzburg Festival, after the lockdown, where she sang from her upcoming album "Rebirth".

Yoncheva’s voice is justly famous for its rich, languorous tone that has transfigured many passionate roles from Monteverdi’s Poppea to recent heroines on her Handel and Verdi discs, and to her La Scala performances in La bohème. We find the same quality here in the controlled intensity of Stradella’s ‘Questa lagrime’ and in Monteverdi’s ‘S’apre la tomba’.

Yoncheva is a consummate performer, and there’s a no-holds-barred quality to this recital that’s very appealing, both in the singing and in the gleeful, mercurial performances from Alarcón and his band.