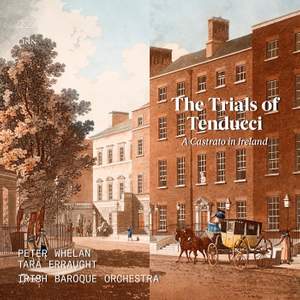 Offer, The Trials of Tenducci: A Castrato in Ireland

[The Mozart] is given a very capable performance by mezzo Tara Erraught, whose attractive tone and warmth are heard to particular advantage in the second aria (‘Tu virginum’)...she copes well... — Early Music Review, 8th March 2021 More…

Arne: Amid a thousand racking woes (from Artaxerxes)

Arne: Water parted from the sea (from Artaxerxes)

Giordani, T: The Celebrated Overture and Irish Medley to The Island of Saints

II. Shepherds I Have Lost My Love

anon.: The Braes of Ballenden

Interview,  Peter Whelan on The Trials of Tenducci

The conductor talks to Katherine about his new recording with the Irish Baroque Orchestra, which explores the musical life of mid-eighteenth-century Dublin and the legacy of one of its brightest imported stars - the scandal-hit castrato Giusto Fernando Tenducci.

Peter Whelan and the Irish Baroque Orchestra explore the music in Ireland from the 1750s to 1770s. Following a live performance, The Irish Times wrote that ‘Whelan and the IBO are lively guides to this repertoire’ which marks a revolutionary moment where the structures of Baroque music break down and we see the emergence of the Classical style. Many trailblazing early classical composers visited Ir eland during this time including van Maldere, Pasquali and Giordani (some even incorporate Irish traditional melodies into their symphonies). Perhaps the most famous visitor to Ireland at this time was the superstar castrato, Giusto Tenducci, who had works especially written for him by Mozart, Haydn and J. C. Bach. To tell his swashbuckling tale, IBO is joined by present - day superstar Irish mezzo - soprano Tara Erraught, performing works which would have been sung by Tenducci in Ireland. This programme also i ncludes modern - day premieres from the collection at the National Library of Ireland including van Maldere’s Sinfonia in G, known as the ‘Dublin’ Sinfonia, Giordani’s much - admired Overture and Irish Medley to the entertainment of The Isle of Saints and The Braes of Ballenden by J. C. Bach.

[The Mozart] is given a very capable performance by mezzo Tara Erraught, whose attractive tone and warmth are heard to particular advantage in the second aria (‘Tu virginum’)...she copes well with the coloratura of the first aria and ‘Alleluia’ and as throughout the programme is accompanied neatly, if in quicker music rather clipped fashion, by the IBO.

Erraught is a perfect choice to step into [Tenducci's] buckled and heeled shoes, her mezzo blending androgynous muscularity with phenomenal agility…This is an immensely appealing recording – a gripping story told with plenty of verve and style.

Whelan handles the music with typically invigorating drive and, like the agile mezzo-soprano Tara Erraught, responds to the album’s classical treatment of Irish tunes without undue sentimentality.