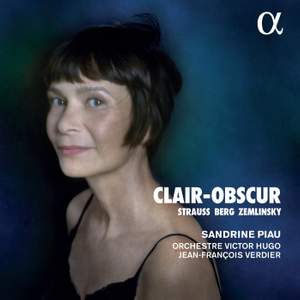 Shunning the velvety voluptuousness of a Jessye Norman or the wide-eyed textual probing of a Schwarzkopf, she brings a freshness of perspective that encourages the reconsideration of cherished... — BBC Music Magazine, July 2021, 4 out of 5 stars More…

The dreamer! That double of our existence, that chiaroscuro of the thinking being , wrote Gaston Bachelard in 1961. The old is dying, the new cannot be born, and in that chiaroscuro, monsters appear , adds Antonio Gramsci. Sandrine Piau has chosen to use these two quotations as an epigraph to her new recording: My family and friends know about this obsession that never leaves me completely. The antagonism between light and darkness. The chiaroscuro, the space in between . . . This programme, recorded with the Orchestre Victor Hugo under its conductor Jean-François Verdier, who is also principal clarinettist of the Paris Opéra, travels between the chilly Rhenish forest of Waldgespräch, a ballad by Zemlinsky composed for soprano and small ensemble in 1895, the night of the first of Berg's Seven Early Songs (1905-08), and the sunlight of Richard Strauss's Morgen, which are followed by the Four Last Songs, composed in 1948, the first two of which, Frühling and September (evoking spring and autumn respectively) are also, as Sandrine Piau concludes, the seasons of life.

Shunning the velvety voluptuousness of a Jessye Norman or the wide-eyed textual probing of a Schwarzkopf, she brings a freshness of perspective that encourages the reconsideration of cherished prejudices...Not only does Clair-Obscur bestride some illuminating and unexpected juxtapositions, it confirms – were such confirmation needed – Piau’s exuberant, allconquering versatility.

Piau approaches the Four Last Songs entirely on her own terms, making full use of the colours at her disposal but never manufacturing weight or darkness that doesn’t come naturally into the voice, and conductor Jean-François Verdier supports her at every turn; whilst there’s plenty of forward momentum in each song, the relatively swift tempi never short-change the music, and textures retain a refreshing translucence.