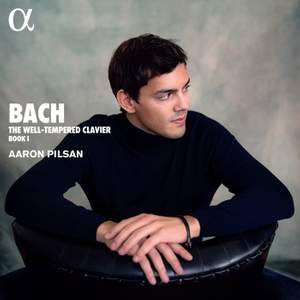 There are myriad good things to say about this album...Pilsan, at only 26 years old, is already a fine communicator of Bach’s rhetoric. — Gramophone Magazine, June 2021

Aaron Pilsan is only twenty-five years old, but he already has a busy career to his credit, with a solo album devoted to Beethoven and Schubert - very well received by the critics - and another of duo repertory with the cellist Kian Soltani. A student of Lars Vogt, he has also received guidance from András Schiff - Bach has always been at the centre of their work together. The young Austrian pianist has been fascinated since childhood by The Well-Tempered Clavier, that musical journey on which Bach embarks with us in Book One: from the seemingly simple and joyful triad of the famous Prelude in C major to the final fugue, of a complexity almost worthy of Schoenberg, on a subject that already includes the twelve semitones of the chromatic scale . . . Ever since I became interested in Bach's music, I have never ceased to ask myself how to make the modern grand piano - which has a rich fundamental sound but a reduced volume of harmonics compared to the harpsichord - produce an essentially well-tempered impression on the listener... But for me it was not a question of instrumental history, but of interpretation.

There are myriad good things to say about this album...Pilsan, at only 26 years old, is already a fine communicator of Bach’s rhetoric.