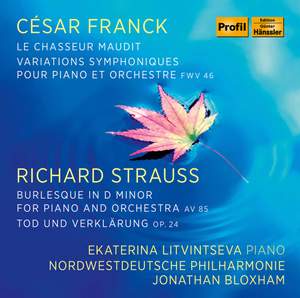 Strauss' Burleske contains, despite the classical sonata form, many original elements, such as the opening timpani solo that al ready embodies within it the thematic substance of the piece. The work is a very ""exotic"" waltz full of contrasts, exuberance, humour and charm. Franck's Symphonic Variations are on the contrary, very formal. You immediately sense the piousness of the person who composed this music, because it is sincere, honest and s ubstantively profound. Yet although Franck remained true to the classical format he still managed to create something new here in as much as he fused three traditions together: solo concerto, symphony and a series of variations. Alongside the two works for solo piano the two symphonic poems by Franck and Strauss are a magnificent addition to the concept of this album. Both works feature a lively musical approach to the s ubject. It's worth noting too that all the compositions on this recording come from a relatively short period of time: the Burleske and the Variations were both written in 1885, and there are only six years between Le chasseur maudit written in 1883 and Tod und Verklarung in 1889. Despite this short time span the works are stylistically very different, somewhat like the fates of the two composers whose paths never actually crossed ."