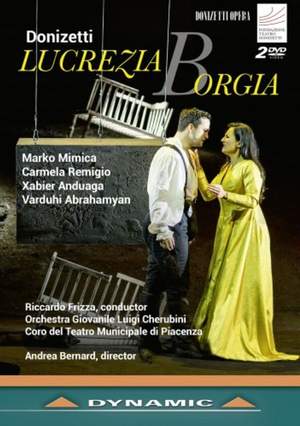 All three principals are firstrate. Carmela Remigio (Lucrezia) combines vocal sweetness with dramatic muscle. Marko Mimica is a casual psychopath in a leather coat and buzz cut. And the young... — BBC Music Magazine, July 2021, 4 out of 5 stars More…

Gaetano Donizetti’s Lucrezia Borgia is a dark and scandalous tale of murder and excess. Initially criticised for its audacious nature, the opera has since become appreciated as one of the great masterpieces of Italian bel canto repertoire with glorious arias and stirring choruses. Created using Roger Parker’s new critical edition and with acclaimed soprano Carmela Remigio in the title role, Andrea Bernard’s spectacular Donizetti Festival production is ‘gripping and intense at every moment… this production ranks among the best all year’ (operawire.com).

‘This production proved that Lucrezia Borgia is a masterpiece worth seeing and one that every major theater should be performing on a frequent basis. With Carmela Remigio’s commitment, Xabier Anduaga’s ardent sound, and Riccardo Frizza’s impeccable conducting, this production ranks among the best all year.’ – Operawire

‘Bernard gives us a very visual staging, one that clearly lays out Lucrezia’s backstory and explains it in intricate stage detail.’ – Opera Traveller

All three principals are firstrate. Carmela Remigio (Lucrezia) combines vocal sweetness with dramatic muscle. Marko Mimica is a casual psychopath in a leather coat and buzz cut. And the young Spanish tenor Xabier Anduaga (Gennaro) has an ardent, yearning voice with exquisite ringing tones – definitely a talent to look out for…There is a good deal here to please the bel canto enthusiast.

Musically, there is much to admire. Frizza’s conducting has real dramatic sweep...The outstanding performance, though, comes from Anduaga, a wonderful bel canto tenor on this showing.

Anduaga is a highly satisfying Gennaro, his voice even in production, clarion-bright yet with individual grain in mezza voce...With Frizza’s baton driving every nail home, the results are electric…this release is an attractive, sonically superior prism through which the power of Donizetti’s black diamond shines.