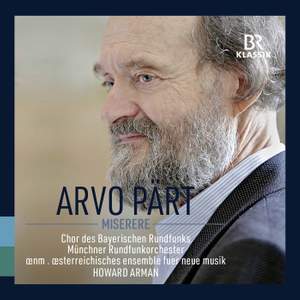 Pärt’s bigboned Miserere sees the Estonian composer at his most devastatingly powerful. It is excellently performed here, as are the shorter, but by no means insignificant, other works on the... — BBC Music Magazine, June 2021, 4 out of 5 stars More…

Versus No. 4, Amplius lava me ab iniquitate mea (Live)

Versus No. 5, Quoniam iniquitatem (Live)

Versus No. 6, Tibi soli peccavi (Live)

Versus No. 7, Ecce enim in inquitatibus (Live)

Versus No. 9, Asperges me hyssopo (Live)

Versus No. 11, Averte faciem tuam a peccatis meis (Live)

Versus No. 14, Redde mihi laetitiam (Live)

Versus No. 16, Libera me de sanguinibus (Live)

Versus No. 21, Tunc acceptabis sacrificium (Live)

Pärt: And I Heard a Voice…

On the occasion of the 85th birthday of Arvo Pärt (September 2020) and the 75th anniversary of the Bavarian Radio Chorus (May 2021). The Estonian composer Arvo Pärt, born in 1935, has succeeded in bringing sacred music back to a broader audience, and away from the confines of the church service, more than almost any other contemporary composer. The meditative character of his works, and his return to the simplest and most basic musical forms, convey moments of intense spirituality. Before his emigration from the Soviet Union, Pärt had already invented what he termed the tintinnabuli style of composition (from the Latin word for a bell). He produced an early and important example of this expressive style in 1977 with his “Cantus in Memory of Benjamin Britten”, scored for string orchestra and bell. It is also a key feature of the choral and instrumental works presented by BR-KLASSIK on this new CD: five works for choir as well as two for instrumental ensemble, covering all of the composer’s creative epochs between 1986 and 2019. Alongside shorter acappella choral works such as “Tribute to Caesar” (1997), “Which Was the Son of...” (2000), “The Deer's Cry” (2007) and “Ja ma kuulsin hääle... (And I heard a voice)” (2017), the highlight of this album – almost 30 minutes in length and with its absolutely spectacular sound effects – is the “Miserere” for soli, mixed voices, ensemble and organ (1989/1992).

Pärt’s bigboned Miserere sees the Estonian composer at his most devastatingly powerful. It is excellently performed here, as are the shorter, but by no means insignificant, other works on the recording.

Pärt’s latest album may not be right for everyone, but if contemporary religious music appeals to you, this is an album with a clean, finished sound, flawlessly performed and imbued with measured beauty and sincere faith.

The first thing to strike the listener is the creamily rich choral sound, which...adds an extra dimension in works such as the opening 'Which was the son of …' that some other outstanding ensembles, even when seasoned interpreters of the composer’s work, cannot match.