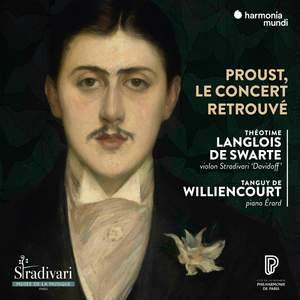 Authenticity is present in an Érard piano, date unspecified, and a Stradivarius violin, the ‘Davidoff’, which has been held in the Paris Conservatoire museum since 1887, when one of the first... — BBC Music Magazine, June 2021, 3 out of 5 stars (Performance) / 4 out of 5 stars (Recording) More…

On 1 July 1907 Marcel Proust invited a few of his friends to a private concert he was hosting at the Ritz Hotel. In a letter he wrote two days later to the composer Reynaldo Hahn, the host described the eclectic nature of the programme.

Composers of his day were featured side by side with the masters of the past and of more recent date: Fauré, Wagner, Schumann, Chopin and Couperin.

In recreating the recital’s wide range of periods and styles, Théotime Langlois de Swarte and Tanguy de Williencourt also revive the intimacy of the Parisian fin-de-siècle salons and transport us into the fertile musical universe evoked in the pages of Proust’s novel, In Search of Lost Time.

Authenticity is present in an Érard piano, date unspecified, and a Stradivarius violin, the ‘Davidoff’, which has been held in the Paris Conservatoire museum since 1887, when one of the first students to play it was the 12-year-old Fritz Kreisler. In the hands of the violinist here it ‘speaks’ with an aristocratic sweetness, aided by his exemplary technique and phrasing.

It’s a breathtaking, astonishing disc, and I cannot recommend it too highly.