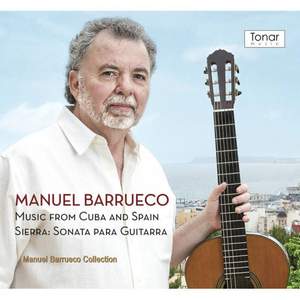 Nin-Culmell: Six Variations on a Theme by Milan

Guitarist Manuel Barrueco presents an album of music from Cuba and Spain including works by Narvaez, Albeniz, Cervantes, Granados and Sierra. "The original idea for this recording was to explore musical connections between Cuba and Spain. Later I thought it would be important to include Roberto Sierras magnificent Sonata para Guitarra. Though Sierra is not from Cuba or Spain, he is from Puerto Rico which is a country with a culture so similar to Cubas that they have been described as the two wings of one bird (de un pájaro las dos alas). Luis de Narvaez (ca. 1490-1547) is one of the most important composers and vihuelists of the Spanish Renaissance, a period also known as the Golden Age of Spain. Included in this recording are Baxa del Contrapunto, a popular XVI century dance; two sets of diferencias or variations on Guardame las Vacas (Look After the Cows for Me), which was a popular song with a melodic-harmonic pattern known as romanesca; and Cancion del Emperador (Song of the Emperor), Narvaezs version of Mille Regretz (Thousand Regrets) by Josquin des Prez, said to have been a favorite of Charles V, Holy Roman Emperor, hence the title. Ignacio Cervantes (1847-1905) is one of the most important and beloved Cuban composers of the nineteenth century. His Cuban Dances, based largely on popular culture, are full of elegance and refinement. Often with whimsical titles, they are built on syncopated rhythms typical of Cuban music and melodies full of charm and melancholy. Included here are: El Velorio (The Wake), La Celosa (The Jealous One), Mensaje (Message), Adiós a Cuba (Farewell to Cuba), and Los Tres Golpes (The Three Knocks). Roberto Sierra studied with Gyorgy Ligeti in Germany. His compositions are part of the repertoire of many of the leading orchestras and ensembles in the United States and Europe. He has written numerous works for the guitar, both solo and in ensemble, as well as several concertos. I am honoured that this brilliant sonata was dedicated to me. Sierra writes: The first movement of the sonata follows the traditional structure of exposition-development-recapitulation. Although the harmonies are not tonal, a strong sense of e permeates the whole work; each movement clearly ends and gravitates towards this tone. The second movement is built on a simple passacaglia motive that builds to a climax, and then ends in the quiet manner in which it started. A wild scherzo precedes the ending movement, which is built on Caribbean inspired rhythms.