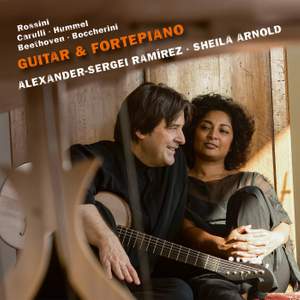 Carulli: Variations on a theme of Mozart's Die Zauberflöte, Op. 169

Sheila Arnold & Alexander-Sergei Ramirez have been performing in the rare fortepiano/guitar combination for several years. The duo has been invited to a number of festivals including Spannungen in Heimbach, the Villa Domergue Festival in Cannes, the Euriade Festival in the Netherlands, and the Schubertiade in Roskilde (Denmark).

They have also performed recitals in the Torre Tagle Palace (Lima, Peru) and in the presence of members of Japanese Imperial family. They have also made a great number of recordings and live productions for European broadcasting stations (WDR Cologne, Deutschlandfunk, Belgian Radio, and Danish Radio).