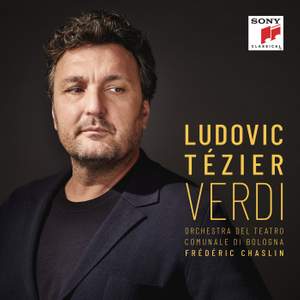 With his richly burnished voice, Tézier gives a compelling account of all these diverse characters but is at his best in the arias that call for psychological nuance and contrasts in vocal shading. — BBC Music Magazine, May 2021, 5 out of 5 stars (Performance) / 4 out of 5 stars (Recording) More…

The French baritone is on spine-tingling form in a high-octane programme of arias from operas including La forza del destino, Otello, Don Carlos, and Falstaff.

Verdi created 28 works for the musical stage, from his fledgling Oberto of 1839 (after it's La Scala premiere the impresario Bartolomeo Merelli commissioned him to compose no fewer than three further operas) all the way to Falstaff of 1893. Verdi thus wrote half a century of opera history. This is also reflected in the arias that Ludovic Tézier has chosen for his debut album at Sony Classical. They begin with early works from what Verdi himself called his "years in the galleys", such as Nabucco (1842) and Ernani (1844), his first collaboration with the librettist Francesco Maria Piave, who would later become so important to him. They then continue through the famous "big three" that finally brought him worldwide fame - Rigoletto (1851), Il Trovatore and La Traviata (both 1853) - and come to an end with the late masterpieces Otello (1887) and Falstaff.

With his richly burnished voice, Tézier gives a compelling account of all these diverse characters but is at his best in the arias that call for psychological nuance and contrasts in vocal shading.

This is surely the finest Verdi recital – from any voice type – to have appeared for several years, if not a decade.

This is a fine achievement by one of today’s very few genuinely top-tier opera performers...across the full duration of a programme 82 minutes in total, he sounds a singer in his mature prime.

The French baritone is endowed with seemingly endless reserves of breath, a rock-solid upper register, and above all a gleaming bronze tone which slices cleanly through the heavy orchestration without ever becoming harsh or raw…This is a recital to treasure from a classy, intelligent singer at the height of his powers, and should be heard by anyone who’s ever worried that true Verdi voices are becoming thin on the ground.

He carries his voice up through the passagio with skill, even in the high placement of the aria from Il Trovatore that brings many a baritone to grief...in some ways this new release is quite overwhelming in its riches. It is a pleasure to hear a voluminous baritone pour his heart out. An interesting and provocative album, well worth exploring.