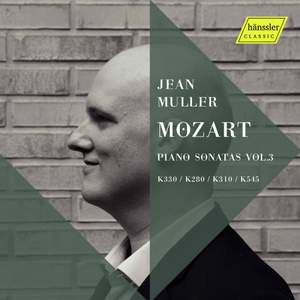 He tempers his modern Steinway with a light and luminous touch; expressive rubato and pedal effects are used with discretion, tempos convincingly chosen, avoiding extremes. Though he tends to... — BBC Music Magazine, May 2021, 4 out of 5 stars More…

The C major Sonata K330 was written in Vienna in 1783 as the first of a set of three sonatas (K330-332) published in 1784 by Artaria in Vienna. For all its far from dramatic manner, Mozart succeeds in creating a remarkable sonata that is as popular today as ever. The Sonata K280 in F major takes us back to the time of Mozart's stay in Munich in 1774-1775. In contrast to the K330 Sonata, this work is marked by some ti mes extreme contrasts of tempo and mood. Mozart's most tragic piano sonata is undoubtedly the A minor Sonata K310. It was written in 1778 in Paris when its composer was still deeply affected by the death of his mother Anna Maria Mozart. The ""Sonata facile"" KS45 is definitely not as easy as the title might lead one to believe. Written in 1788, this sonata is noteworthy for all its great (or greatest attainable) simplicity as an example of Mozart's absolute mastery of the compositional art. Hailed as a ""major talent"" by Gramophone, Jean Muller has shown exceptional musical talent since his earliest childhood. More than a dozen first prizes at international piano competitions stand witness to the extraordinary impact of Jean Muller's interpretations. He performed the complete cycles of Beethoven's and Mozart's piano sonatas in concert. He recei ved outstanding reviews from the industry's leading media. Since 2010 Jean Muller is professor for piano at the Conservatoire de la Ville de Luxembourg and since 2016 is a Steinway artist

He tempers his modern Steinway with a light and luminous touch; expressive rubato and pedal effects are used with discretion, tempos convincingly chosen, avoiding extremes. Though he tends to smooth over Mozart’s periodic demands for abrupt dynamic contrasts, everything flows.